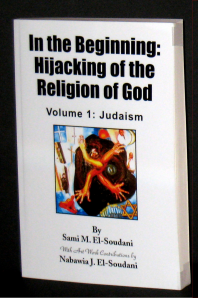 “In this volume the author reveals the shocking details of two phases of hijacking of Judaism spanning together a period of three millennia starting with the worship of the Golden Calf in the lifetime of Moses (whence “In the Beginning: Hijacking of the Religion of God”), and continuing till this day with the recently ongoing hijacking of Judaism by Zionism.  In the “Temple State” era of ancient Jewish history the ‘First Hijacking of Judaism’ spanned the entire lifetime of both ancient Jewish kingdoms (Israel and Judah) culminating with Temple destructions in Jerusalem on two occasions: First by the Babylonians and later on by the Romans.  These events were viewed as Divine punishments for infractions in the Jewish Temples, where the Jews had been for centuries worshipping Golden Calves, and other pagan deities (Bull-El, etc.) either in lieu of, or besides Yahweh (Jehovah, or Allah).  By contrast in modern times with the advent of the so-called “Religious Zionism,” the utterly secular Zionist Movement gained solid control and a firm grip over the fourth coming of the Jewish State (contemporary Israel is fourth after ancient Israel, followed by the Hasmonian and Herod’s Jewish Kingdoms).  Presently the so-called Religious Zionists are exploiting the messianic hangover plaguing a large segment of the International Jewish community and thus perpetuating a never-ending, post-Messiah (Jesus) search for the Messiah.  The author also reveals a most unfamiliar aspect of the Second Hijacking of Judaism, namely that before Zionism could hijack Judaism, the Zionist Movement itself was hijacked by Eastern European Zionist extremists, namely Hayyim Weismann and Menahem Ussishkin, with both advocating and sharing a racist agenda and an insatiable appetite for real estate grab, turning the quest for a land of promise endorsed during ancient times by a Merciful Divine into a contemporary nightmare of promised territories.”

For those who have an electronic book reader, such as Amazon.com Kindle 1 or 2 or Sony Readers, this book Volume is also available in electronic EBook format.  Ordering the EBook file from ORDERS@Xlibris.COM should use a different ISBN number and that is: